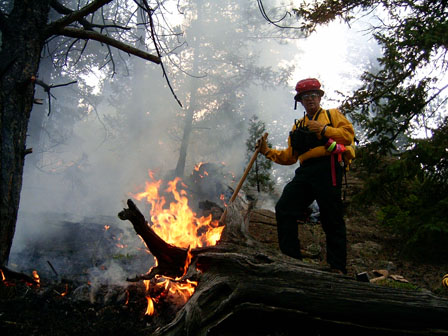 The Sheriff, by Colorado State Statute, is the "Fire Warden" for forest and prairie fires.

In late 2002, the Sheriff's Office formed its own Wildland Fire Crew after a busy year for fires in our region. The crew consisted solely of Sheriff's Office personnel. In early 2004, the Sheriff's Office received several inquiries from residents that wanted to fight wildland fires but did not want to commit to year-round fire/rescue response with the fire authority. The combination of community interest and the severe manpower shortage in the volunteer fire authority brought about the concept for T.H.E. Marmots.

When first formed, the crew was called the Clear Creek Timber Team. However, due to the Incident Command System structure, the term "Team" could not be used. Therefore, the name change occurred in 2005. The Wildland Crew is comprised of Sheriff's Office staff and volunteers. In 2007, we had approximately 32 qualified (Red Carded) members. We started with a mix of members that ranged from no experience to very experienced in the wildland arena.

The goal was to recruit and train a crew for wildland response. This would allow local resources to work a wildfire and free up the local fire authority staff to maintain staffing for other calls for service.